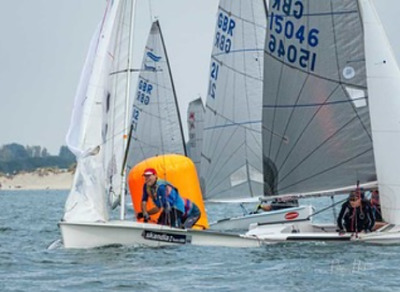 Injury saw one having to withdraw. Mengham Rythe Sailing Club were happy to host the Bosham boys which meant for easier launching and recovery although the week of racing is actually hosted by Hayling Island Sailing Club. The total entry this year was near the maximum of 400, which indicates a good underlying state of modern racing classes across Chichester Harbour.

Courses are 'Olympic-style' with 'triangles and sausages' formats for seventeen different starts across four committee boats. Race duration is aimed at 2 hours which usually means three long beats (1+ nautical mile) and two down winders. The Finn Fleet for the week comprised twenty-eight entries, the best for some years. The biggest contingent was from MRSC, but boats came from across the southern region.

A very friendly and inquisitive Harbour Seal popped up on out startline on Thursday.

The highest placed BSC boat was that of Jem Drummond at 12th. Jem has been in the boat for just over a year, so that was pretty good going in hot competition. James Symons posted highest placed BSC Finn with two eight places, but could only attend for two days. The full results can be found here.

The BSC Finn Fleet is now turning its attention to club racing for the autumn, although a healthy Traveller Series continues across a number of South Coast clubs including Mengham, Warsash and Christchurch.