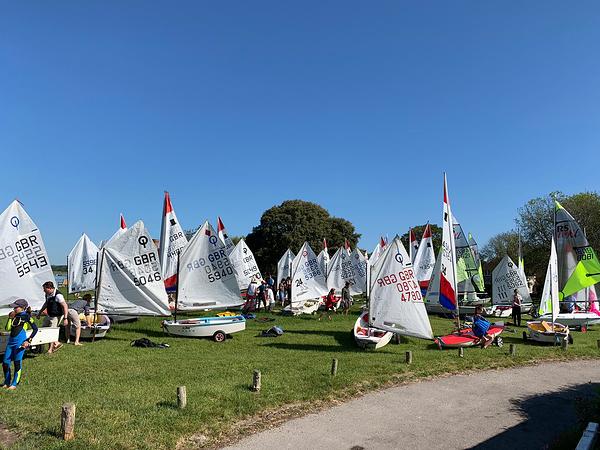 Wow! What an incredible day we had for the 2022 BSC Junior Regatta! The sun shone and despite the chilly northerly wind, we had a good breeze for our cadets who came out in force to support the event. In total there were 52 boats (25 Oppies, 8 toppers, 8 Fevas, 6 420s and 5 lasers) making a total of 66 cadets on the water.

Plus many more. Without doubt, everyone thoroughly enjoyed themselves and had lots of fun in the process. There was great Bosham Spirit on display determination, smiles, humour, true grit, camaraderie, support and lots more. Just brilliant!

Our two race officers, George Kent and Domi Akers Douglas along with their race teams put together 3 fantastic races for each of the fleets. Below is a small summary of what happened in each fleet. A full list of the results can be found here at Bosham Sailing Club : BSC 2022 Results

There were a number of new sailors amongst the silver oppies who coped incredibly well for their first time racing. They also provided a fantastic spectacle for all the parents watching from the quay. A true testament to the hard work that has been taking place in the training sessions. Every one of the sailors should be applauded for all their efforts. In the end, time on the water for Arthur having just returned from 3 years sailing around the world shone through.

It couldn't have been closer amongst the gold oppies. There was literally nothing in it between the boys in the top 4 places. It all came down to the last race and the discards. After a nail biting wait until prize giving, it was revealed that Benji nailed the top spot this time, but only just!

The racing was full of drama amongst the Fevas too. With several new comers to the fleet in amongst the more experienced Feva sailors you literally couldn't call what would happen next. Despite being a bit rusty in the first race, Will and Seb got their act together and pulled off two wins in the 2nd and 3rd race to grab the top spot.

With 2 sets of siblings in the lasers it was always going to be interesting to see how everything panned out! It was incredibly close and exciting to watch with the finishing positions changing with each race. In the end the sheer class of James Curtis won the day. James gave up the opportunity to train with the National Welsh team on Sunday to join us for the Regatta on Sunday. With James's busy sailing schedule, it was really fantastic to have him with us, thank you James.

The partnership of Ed and Fred who are an experienced pairing in the 420's were always going to the be ones to beat having won last years Junior Regatta and Junior Week. However, girl power was in hot pursuit with Laura and Alice winning one race and 420 newcomers Bella and Francesca closely following behind. Well done boys but watch out for those girls!

As a result, we had lots of Special Cadet Award Nominations!

Not usually awarded at the Junior Regatta but after hearing about this nomination we decided to make an exception. In fact it is quite a story!

Rob Lavender for rescuing the Committee Boat!! There is a good story to be told so please ask him!

It took over 40 volunteers to make the Regatta happen. Huge thanks to everyone for their support but in particular to those who stepped in at the last minute to help on the day and those who gave up their time and didn't have any children sailing Mel & George Kent, Jos & Howard Palmer, Holly Baker and Dombey Wallage. In addition, special thanks also go to

This was just a small taster of what Junior Week is all about. Therefore, we are now looking forward to our full week in August when there is bound to be plenty more sailing and social highlights. Bosham Junior Week online entries go live on Monday 6 June. We look forward to creating more wonderful memories then as well.