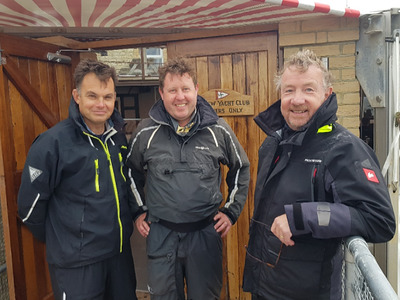 The Bosham team departed at 0745hrs under the capable hands of Captain Kings skilful Solent navigation enabling us to get to Seaview for some needed pre-race coffee. Conditions were generally Force 4 from the North meaning a rather confused sea state in the Seaview race area with the usual strong tides to contend with and ensuring challenging and very busy spinnaker work.

The event had 9 teams of various clubs based around the Solent. Racing was intense with a total of 6 races (Windward/Leward generally 2-3 laps). The overall winners were Imperial Poona Yacht Club followed by the Hamble River Sailing Club and RORC was in third place. Bosham finished in 6th place.

Although Bosham did not finish on the podium fun was had by all, with no damage and just a few sore and tired bodies afterwards.

We departed Seaview soon after the racing was completed and we arrived back to Bosham Quay at 1800 hours. A special thanks to Simon Radford for organising the day and also for getting the Bosham crew to and from Seaview on his RIB"