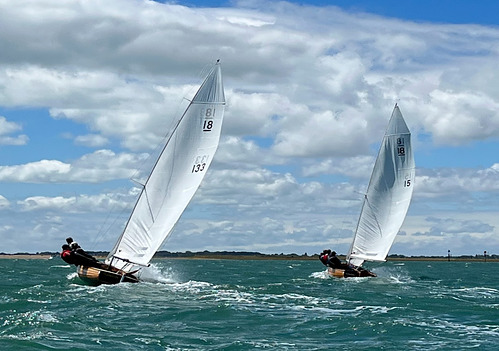 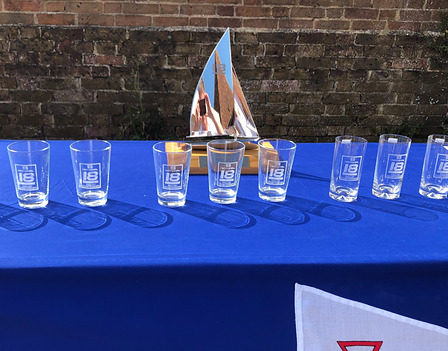 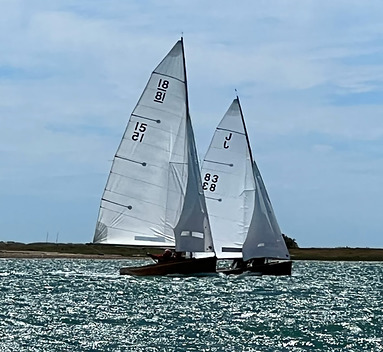 The National 18 & Chichester Harbour English National Championships were held over the weekend of 2nd & 3rd July 2022 at Bosham Sailing Club.

They joined with nine local Classic N18's & Chichester Harbour 18's for a testing series of 5 handicap races over the 2 days, in breezy conditions.

Saturday's 1st race was concurrent with the club's CDB fast fleet, which added a Jolly Boat and 12 Sq.M Sharpie, to the fleet mix. It was a long, hard beat to Dunes, with some respite on the downwind legs, but tricky, with winds averaging over 18kts and peaking just short of 24kts.

The testing conditions resulted in a few gear failures and retirements but only one capsize. The bright sunshine belied the hard work in keeping these powerful rigs upright.

The wind eased slightly for Races 2 and 3 with an average of about 17.5kts gusting 21.5kts. Nick Fox, our RO and his team, set some shorter courses, which were appreciated by some already tired crews. There were fewer starters due to the attrition from race1.

Race 2 & Race 3 saw the Ultra 'ACE' get to grips with conditions and fizz around the course with their novice 'wire man / trapeze artist ' Alison Hindley, who had bravely volunteered to stand in on the day, for her first sail in an 18. By all accounts she did a great job and was still smiling at the end of the weekend. Maybe a new convert to n18 sailing?

The local Chichester harbour 18's enjoyed these strong breezes and Bellatrix, with team McCormack on board, were starting a consistent run of results.

Some, like your correspondent in n18/368 Toucou, never featured on day1 due to some self-inflicted technical issues.

After a hard afternoon afloat, there were some tired but relieved crews who came ashore to enjoy a sunny Saturday evening on the terrace and a well attended club supper.

Day 2 , saw an easing of the wind, to a mere average of 14kts gusting 19kts for the final 2 races. With a few repaired boats back out to the start line, racing was tight and competitive. Tom Reid's Classic, Theorette n18/133 with her repaired jib halyard, enjoyed the breeze and started to feature but Ace yet again took these last 2 races and with that, the Championships.

The last race saw some places traded after the gybe mark at Deep End, on the spinnaker reach coming down the channel to the finish, on the Quay Line.

Amanda Mirams handed out the prizes, with the National 18 English Trophy being awarded to the winners: N18 Ultra - 424 'Ace': with Oli Houseman, Alison Hindley and Jeremy Vines.

(A nice circle completed, as Jeremy and the late Richard Howells had donated the trophy for this event some years ago)

Thanks as usual to the people who make these events work i.e. the RO Nick Fox and his team on the committee boat to the patrol boat volunteers, who also kindly provided the pictures, our tea makers and of course the club staff afloat and ashore.

Day 1, courtesy of Alison Garrett, can be found here

Day 2, courtesy of Veysey (on the water) and Nicky Chapple (prize giving) can be found here.