Round the Island Race 2022 - Bosham Multihulls

Round The Island Race 2022 Bosham Multihulls

Three tri's left the harbour Friday afternoon for dinner and berthing at the Folly.

Multihulls started at 8-10, 10 minutes after IRC 0 and 1 monohulls, the tide was turning west, wind 18-25 knots. Clear air was at a premium while passing the Class 1 monohulls to the Needles, few boats had reefed their mainsails so a near capsize upwind focussed Alini's concentration. Unfortunately approaching the needles Storm on starboard was T-boned by another Tri that failed to bear away behind, Storm forced to limp home. The fetch down the west side of the island was fast, more class 0 monohulls were overtaken. Surfing at St Catherine's was entertaining and very wet. Alini briefly caught the Fast 40's but some overtook again on the run to Bembridge. Family Tide and Alini held code 0's part way back to Cowes but could not catch all the Class 0's. Dark'n'Stormy was the first monohull since Drum in 1988 to win both on elapsed and corrected time. Overall line honours went to NGB trimaran.

Alini 5h 6m, (for the 50+nm course), 9th fastest boat, 5th fastest multihull, on corrected time winning both The Golden Miller Cup for all multihulls and the Trifle Trophy for the MOCRA class. 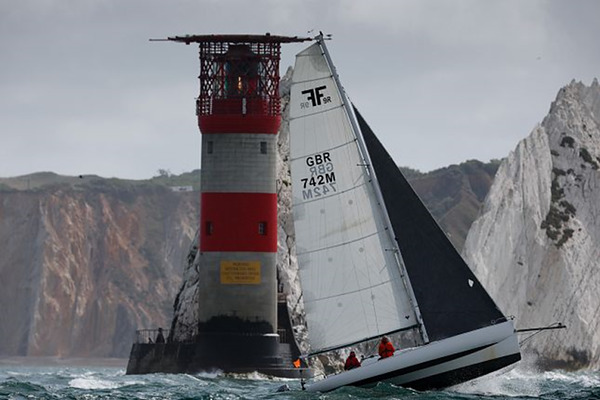