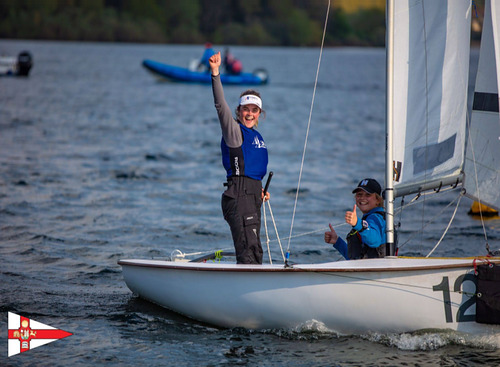 Congratulations to Bosham sailor and BSC instructor Cossie Lewis who was one of the three helms for Exeter University whose sailing team won the British Universities team racing championships last month. University team racing is done with 3 boats per team, typically in Fireflies, with each team trying to establish an overall winning combination for their team over their opposition.

The racing is fast and furious and rewards good starting, boat speed, boat handling, rules knowledge and team work skills. Each race typically lasts about 10 minutes. There is a fuller explanation on the RYA site here.

At the university championships Cossie's team won 20 of 22 races placing them as first seed in the quarter finals where they won 2-1 against Bristol, then defeating Oxford 2-0, before beating Southampton 3-2 in a tense final. Cossie was the only female helm in the finals. She follows in her brother Dom's footsteps (also a BSC instructor) who was a helm for the Exeter team which won the last two team racing championships. Cossie goes on to captain the Exeter University team in her final year.

Both Cossie and Dom then went on to sail for Exeter and the Cambermet Cardinals (respectively) at the Wilson Trophy in West Kirby, the premier national team racing event of the year. This involved 32 teams from the UK, the US and Ireland, racing over three days. The US teams took the top four spots with Dom's team finishing 12th, and Cossie's team 17th where they also took the U21 trophy.