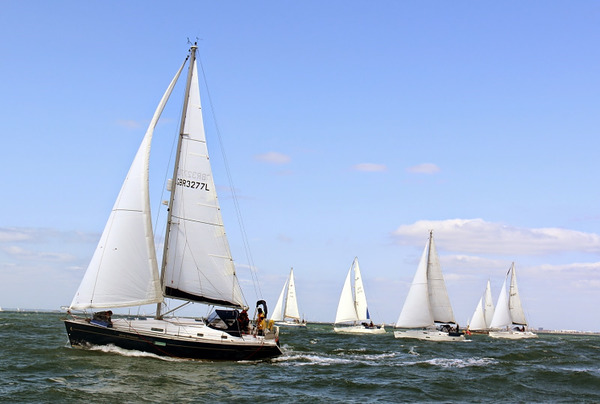 The day of the 2022 Nab Tower Race dawned grey and damp, what a contrast to last year. The Easterly wind built as forecast and most competitors had one reef in by the time they had reached the starting area. Race Officer Alastair Johnstone set the best line possible given the wind direction and the slow fleet started at 10.00am as promised.

But sailing is notorious for being a sport full of surprises! Who would have thought that by the time the fast fleet started 15 minutes later the wind would drop away completely and seem to be coming from all directions and none, at the same time? As one veteran of this race said, 'it's the Nab Tower Race - the weather always has the last word'.

Of the 22 starters, only 13 finished. Constant rain, thunder and lightning, a few breakages and lack of wind all took its toll. Unsurprisingly, line honours went to one of the two Dragonflies racing. Well done Charles Strick on Trinity.

In 1st place was HISC sailor Gavin Mariott on his Swan 36 Markova, 2nd place went to George Kent on Respectable and in 3rd place was Simon Hollands on his Contessa 26 Sulali. Some bedraggled sailors returned to BSC, pleased to see the bar open and the pizza van still serving. Spirits lifted immeasurably!

Judging from the messages on the WhatsApp group a lot of fun was had by many despite the less than ideal conditions. The Bosham cruiser spirit is indomitable!